A full nursery reveal post will be up later, but for now I’d like to show you some wall art I made for my baby’s nursery. I wanted his name on the wall, but didn’t want to paint wooden letters.

The nursery is loosely based on a woodland theme, so I made the art to match.

The gold frames are from the dollar store. I hot-glued dried preserved moss mats directly onto the glass, then hot-glued on the other materials.

The O is a bird’s nest with fake eggs.

The T is a mushroom I made out of red wool felt and white linen.

The second T is cut out of birch bark. 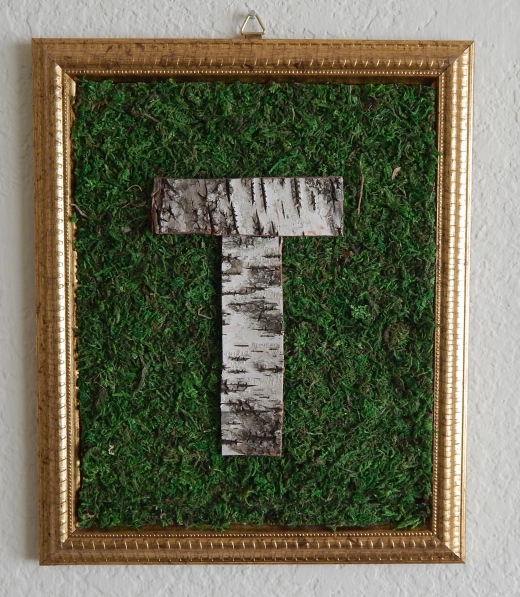 The last O is made of sola wood flowers, which are wonderfully light-weight. I think I would like to use them for millinery sometime.

The moss, nest, bark and flowers were purchased from Sav-on Crafts.

Blog @ freshfrippery.com. Instagram @freshfrippery. I believe costuming is about helping others so I post tutorials when I can. I am happy to provide all patterns and tutorials for for free on my blog. It is absolutely optional, but if you would like to donate towards my domain registration and the data costs of hosting the many photos on my site, consider buying me a “coffee”: https://ko-fi.com/freshfrippery. Thank you!
View all posts by freshfrippery »
← Navy Regency Bonnet
Handmade, DIY & Vintage Woodland Themed Nursery Reveal →