A Regency Couple at a Winery Plus Costume Hack: How to Upcycle a Men’s Regency Outfit Using Thrift Store Items

My husband and I attended a Regency-themed event called “Wine and Peace,” hosted by the Greater Bay Area Costumer’s Guild at Wente Vineyards. My husband is not a costumer, but agreed to dress up when lured by the prospect of wine tasting. Thus, although this post contains some nice photos of the both of us, the real point is to show how a panicked person can put together a passable men’s regency outfit when time is too limited to make one from scratch. 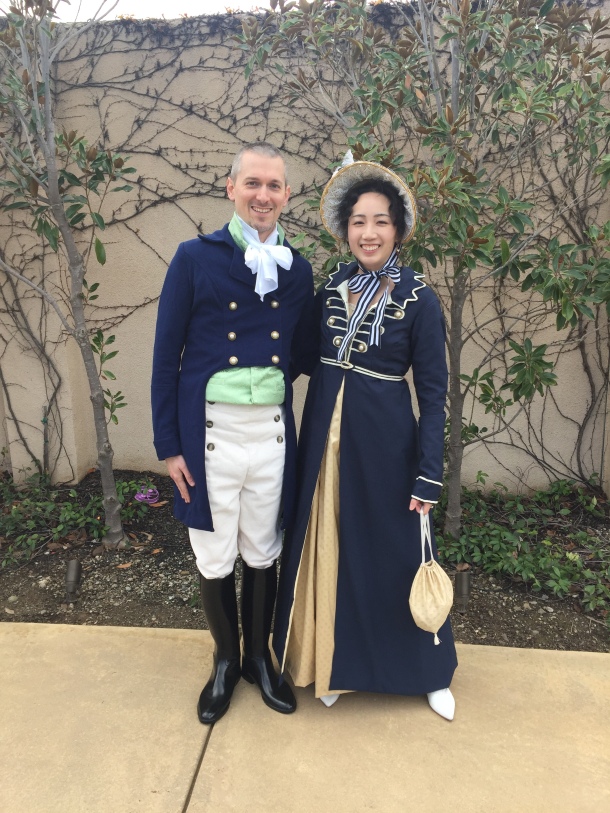 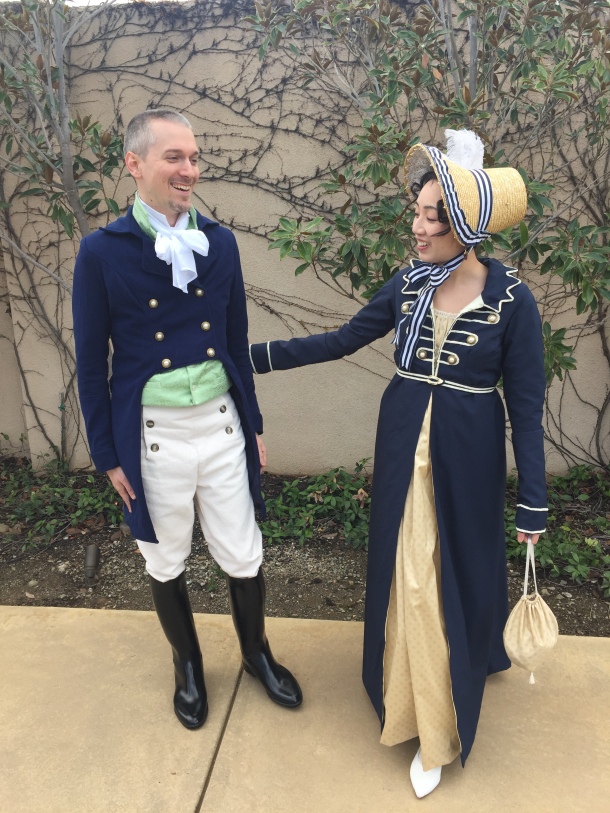 It was too cold for me to take off my pelisse, so you can read about the silk gown I wore underneath in my previous post. The pelisse and bonnet are not new, although I’ve only had the chance to wear them once before, and you can read about those items in an older post. 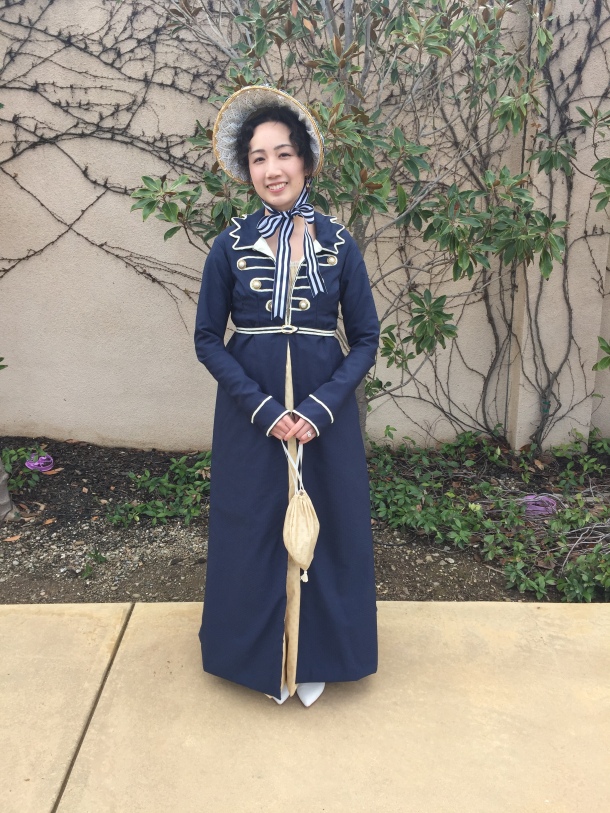 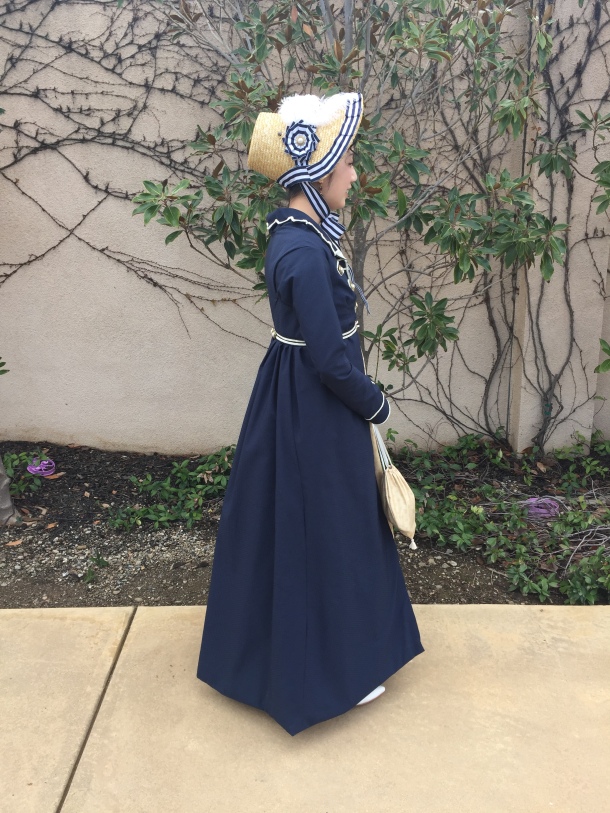 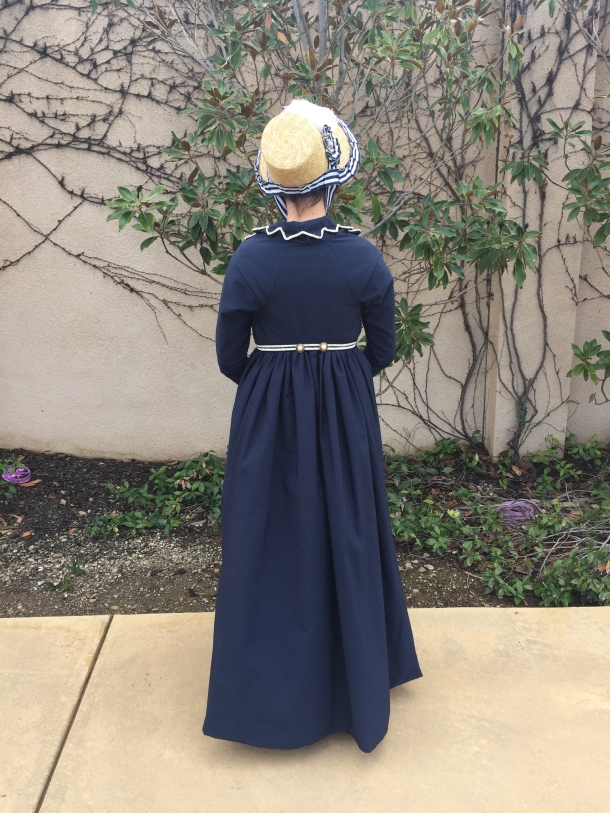 My husband’s outfit consisted of a navy blue coat, a green waistcoat, a white shirt and neck tie, ivory trousers, and black boots. 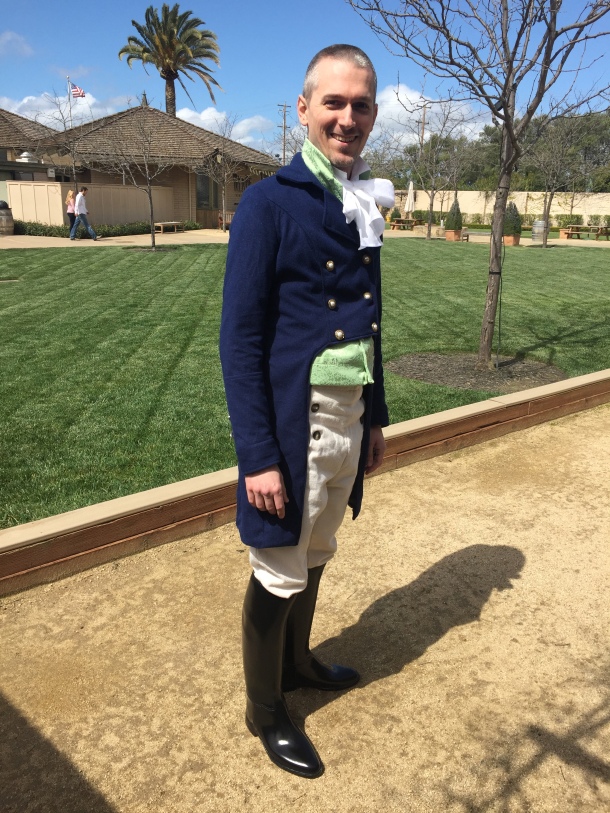 It is not completely historically accurate, especially the back where I had to fudge it a bit, but it did just fine for a quick outfit! 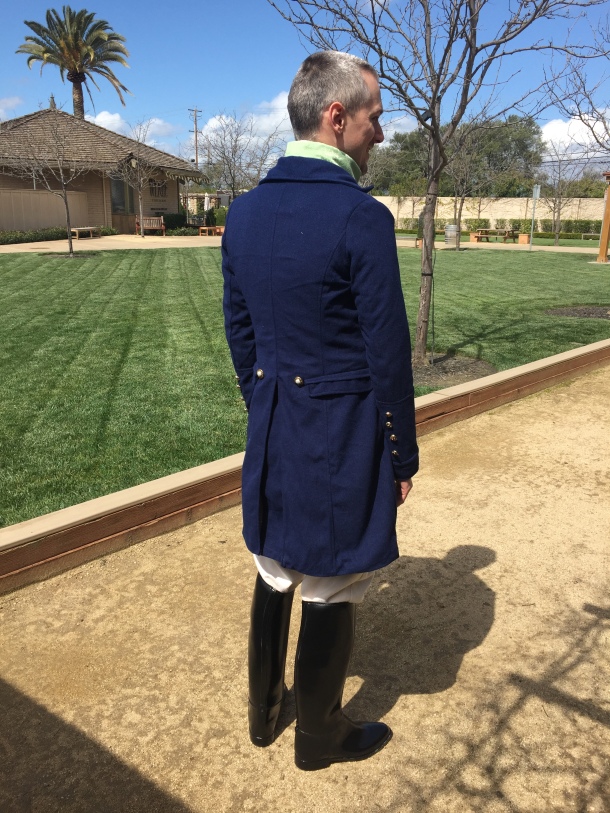 The coat is up cycled from a double-breasted woman’s coat. (Women’s military-stye coats are longer than men’s).  I made a number of changes: 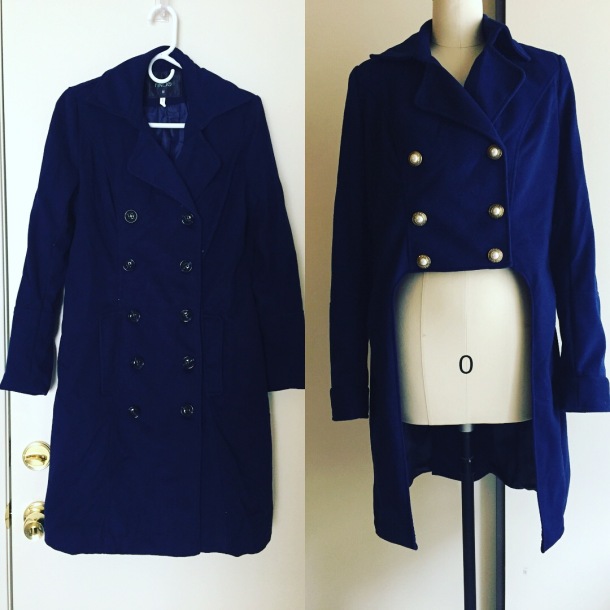 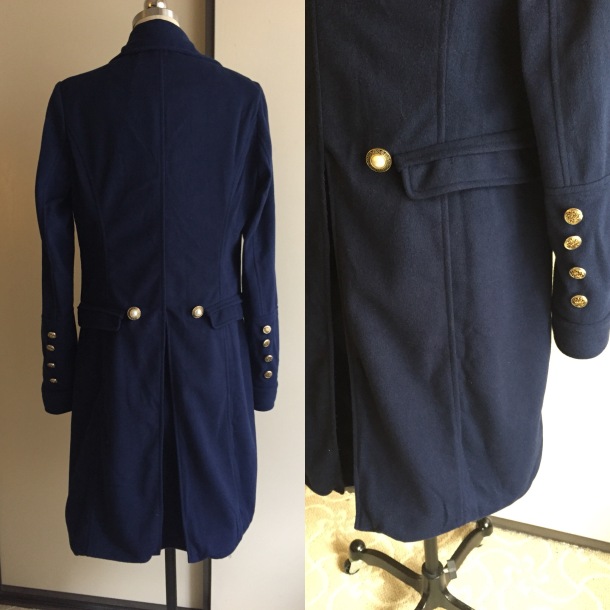 I recommend looking for a coat like this during the winter. When the weather warms up you may have to go shopping at several places to get one!

I also recommend making sure your subject isn’t slouching or looking down when you mark the cutting line in the front of the coat. When I sewed it up I realized it was cut a little higher than I intended. The look is accurate and fashionable for the time period, but I had planned on a little more coverage.

The waistcoat is an even easier upcycle. Modern vests have pointed fronts while Regency period waistcoats have flat fronts. If you can find a vest with a nice pattern in the fabric, just fold up the front points and tack them to the inside of the vest. (We already had a vest for my husband, made by our friend Kim for our wedding in 2010). 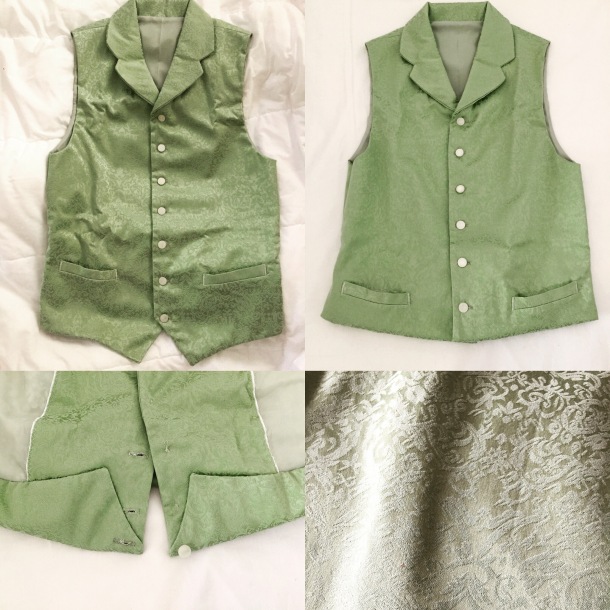 If the fellow doesn’t plan to take off his coat, very little of the shirt will show except the collar.  Find a nice dress shirt with a good stiff collar that will stand up. This will not work so well if you have a floppy collar that is not interfaced.

Flip the collar up, cut off the points, and hem nicely. The modern sleeves and buttons will be hidden by the coat. 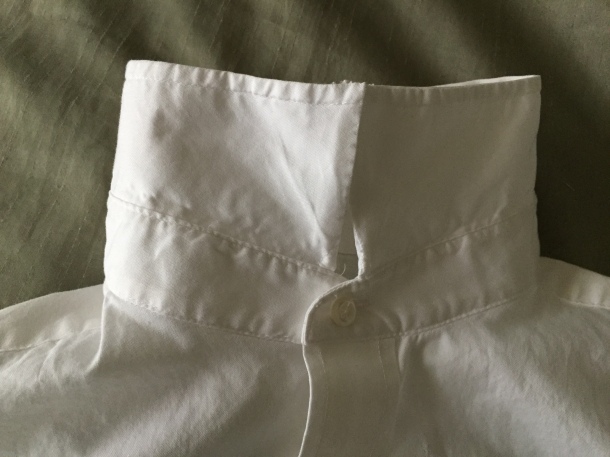 The button at the throat will be covered by the neck tie, which is simply a long rectangular piece of cotton fabric. If you don’t have fabric around your home, you can cut up some textile from the thrift store. You will want the cotton to be thin, to make wrapping and knotting easy. In this case, a cheap bedsheet or semi-sheer curtain is better than a nice tablecloth that will be too thick. The neck tie I made for my husband is 2 yards long and 8 inches wide, made from cotton voile. 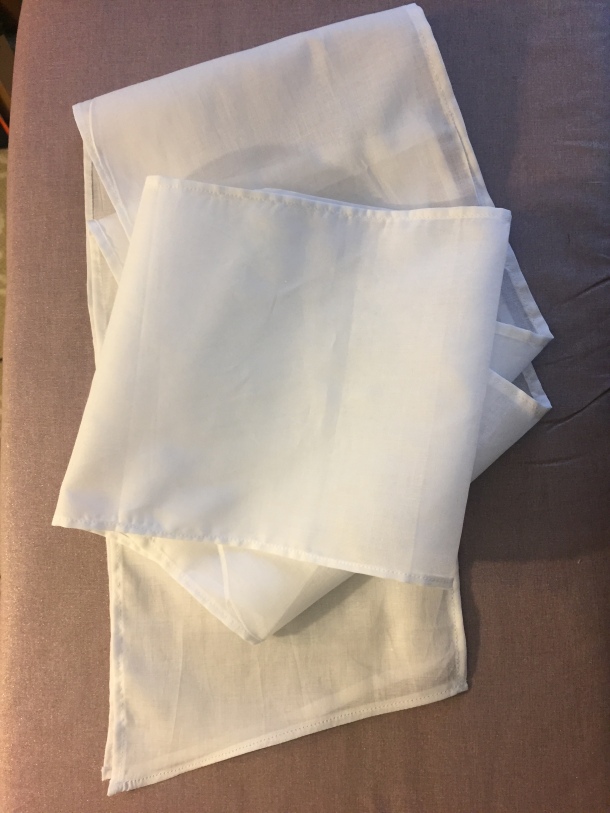 Hem the edges and taper the ends a little. 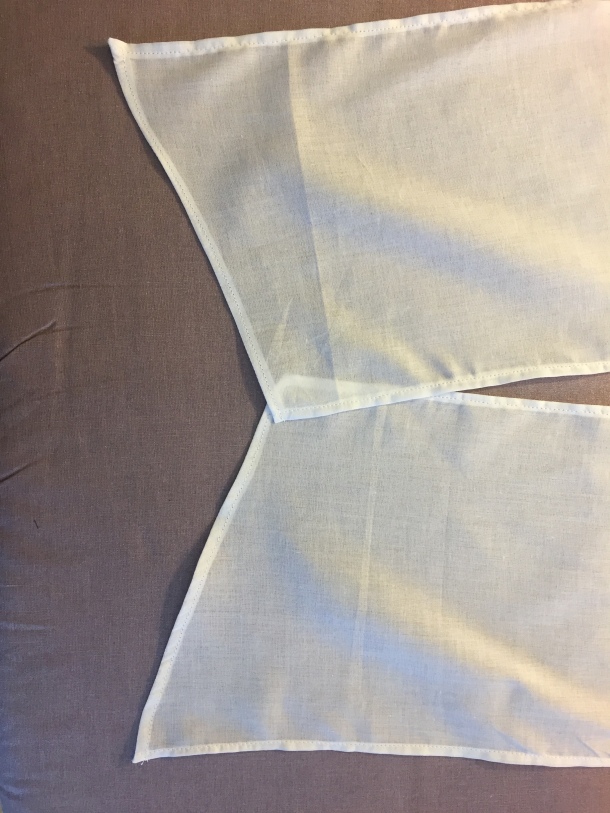 The trousers were a a tricky part of the outfit because of the fall-front, which is not seen in modern men’s fashions. I found a number of high-waisted sailor pants, but they were generally women’s pants in the wrong materials or cut. I then considered making them myself, but after pricing out a pattern from Laughing Moon and buying nice fabric and buttons, I realized it would cost me at least $50 to make and about $70 to buy them. Thus, the trousers were purchased from Historic Emporium. The lesson here is sometimes it’s worth buying and being done with it! (The pants come long enough for you to hem into breeches or keep as trousers).

The boots were Ovation rubber riding boots (affiliate link) purchased from Amazon for about $40. They weren’t real leather, but still looked pretty nice, and can be reused with other costumes in the future. If you are lucky, you may able to get some nice boots locally. Don’t forget to look in the women’s footwear section for larger boots! There’s a lot of “riding boot” style women’s boots sold during the fall and winter that could work with Regency. 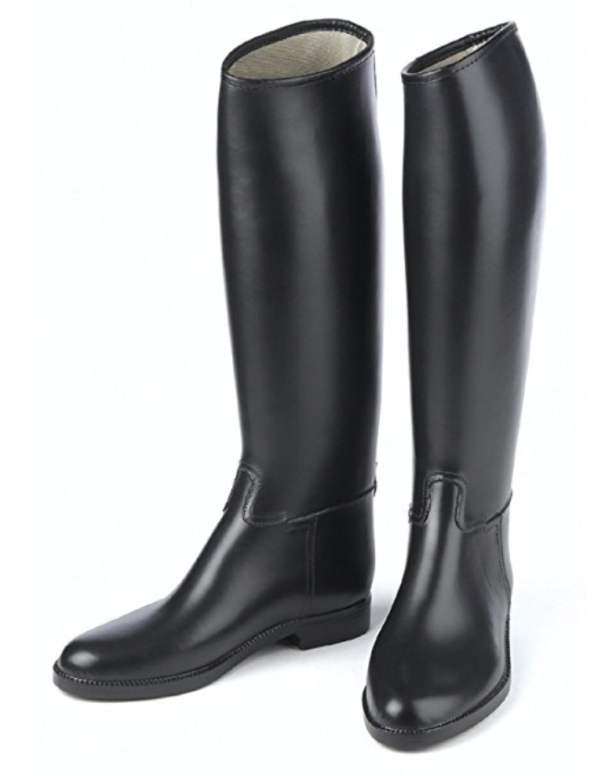 I hope this post was useful, and now you can keep an eye out for the right kind of coat and other items to upcycle into a Regency men’s outfit! 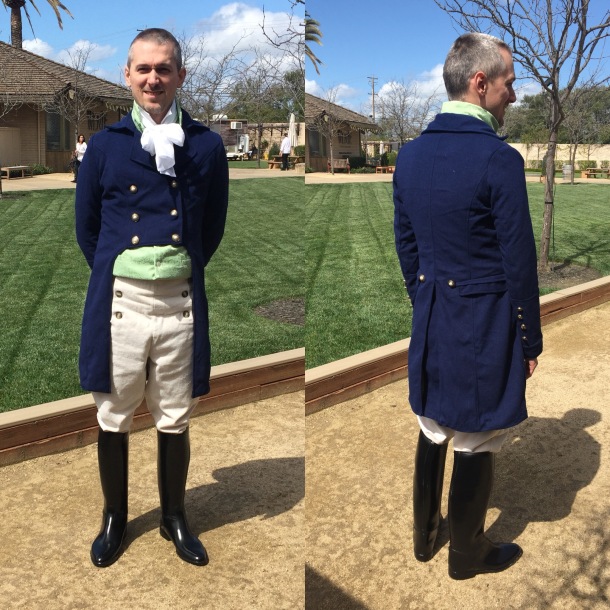