Good Intentions Don’t Excuse Bad Behavior (Sequel to “It’s Not Necessary to Be Mean: Snark in the Costuming and Cosplay Community”)

About a year ago I wrote a blog post called “It’s Not Necessary to Be Mean: Snark in the Costuming and Cosplay Community” and was meaning to follow up with a part two post on the anniversary, before the holidays buried me. No time like the present! If you haven’t done so, please read that previous post first; it goes over some tips and general manners for both newcomers and veterans to treat themselves and each other kindly. Consider this post a slightly more advanced primer about how good intentions don’t excuse bad behavior! I hope to get people to think about what they have been doing and whether it is unintentionally unkind.

Are your “helpful” comments really helpful?

You may think you’re giving constructive criticism, but please consider carefully if it is 1) wanted by the recipient and 2) whether it could be interpreted as condescending. Here are a few comments I’ve seen that the speaker probably thought were benign or even helpful, but a newcomer or sensitive person could find very hurtful:

To be clear, those can sound judgmental and are not okay to say to someone! Well, what’s okay then?

The first example takes into consideration what the other person wants, and gives them the option to decline. The second example assumes the other person needs and wishes to “improve” and doesn’t have health or funding issues that require them to wear certain footwear.

The first one is a topic of conversation about one’s own experiences and is framed with an offer of help. The second makes the other person feel bad if they haven’t had the opportunity to put together a wardrobe and the financial privilege to travel.

It’s great to be helpful! But be mindful that your suggestions don’t imply that you are judging someone, or that person will be judged by others.

Don’t put yourself down.

Some of you reading this may not realize it, but there are others that look up to you. They may be brand new or established in the hobby but admire your work. Perhaps you are a friend of theirs, or someone they follow on Instagram, or write a blog they follow, but you have more influence than you know.  Many of us are our own harshest critics and may joke about our work being “trash” but others are listening. Imagine how disheartening it would be to think that something you admire and aspire to is “not good enough” for someone you see as a role model, and thus worry your role model may be judging you too. Please be kind to others by being kind to yourself first. We all start somewhere.

I understand that some people make negative comments about their own projects to avoid seeming snobby, or to keep others from making the same mistakes. There is nothing wrong with taking a compliment gracefully with a simple “Thank you.” If your goal is to be helpful, spin your self-critiques positively.

Good intentions don’t excuse bad behavior, especially when it comes to physical contact. Wanting to compliment someone or take a closer look at their costume does not mean you can touch someone without permission. Because you are at a convention or a fellow costumer does not mean you are automatically entitled to permission. No means no!

You would think these are obvious rules, but I am listing these out because of incidents that have actually happened to me or my friends:

Please do the following:

Don’t talk about a stranger’s race.

I’ve sometimes encountered individuals who said things like “Oh, it’s so nice to see a POC in the hobby!” I know they mean well or are trying to demonstrate how “woke” they are, but really the message they are sending is that regardless of my friendliness or skill in costuming, the very first thing they noticed and thought was important to comment on was the color of my skin.

If a particular ethnic group is underrepresented in your circle, a great way to make them to feel welcome is to treat them like everyone else. Specifically pointing out what makes them different may alienate someone.

Don’t assume that just because someone is a POC that their costume is ethnic in some way. If you assume wrong you may make someone very uncomfortable. One year I was at a convention wearing a Game of Thrones costume, along with a dozen other women using the same pattern. I’m pretty sure not everyone was asked questions like “Is that a kimono?”  “Are you Korean?” “Is your hairstyle part of your culture?” “Are you supposed to be a geisha?”

And please never tell someone it’s “not historically accurate” for someone of their ethnicity/ gender/ disability/ age to participate in or be present at a particular event or time period. If you’re a dentist 40 hours a week and pretending to be a Civil War soldier on the weekends, you have no business telling someone who they can’t pretend to be for fun. If you’re into fantasy stuff and cool with orcs and elves but you’re weirded out by the idea of black people in medieval Europe, maybe you should find another hobby.

What if you are an organization?

Note: If you are a reenactment group, living history site, or museum you have the right (or even an obligation) to set your own rules and educate the public about historical facts. My comments are directed at casual costuming groups such as sewing clubs, cosplay conventions, theme parties, etc. to prevent feelings of exclusion and gatekeeping.

Mentor newcomers! Host workshops, have resource lists, create an online forum where they can ask questions, etc. Write out a defined non-bullying policy and make it clear that derogatory comments about a cosplayer’s body shape, culturally insensitive costumes, etc. are not permitted. Allow for beginners to explore their interest in the club without requiring costumes that require a lot of upfront investment in time and money.

Don’t have an intentional or unintentional hierarchy with “elite” club members; encourage everyone equally. For an example of doing it right: my local costume guild had a fashion show this past week. Calls for models were public and open to all skill levels; they were not just friends of the president or “the best of the best.” There were no applications, auditions, lengthy rehearsals, or onerous requirements to enter that would scare off newcomers. The models were all ages, genders, and body types, and wore self-made and store-bought costumes, or even literally artfully wrapped bedsheets, and no one was turned away. There were other activities so that the fashion show was not the main focus, and the organizers made it clear they did not want anyone to feel left out.

Depending on the size of your organization you may require more formality to herd the squirrels. But if you don’t need to, don’t add layers of complexity that scare away shy or new people.

If you are a visitor to an educationally-minded group like a living history site, do remember the distinction between trained employees/volunteers and members of the public.  If your idea of playing along is to dress up in a historical costume that is correct for the time and area that site portrays, great! That does not give you the right to shame others that don’t or make snide comments about how someone’s clothes are off by a decade.

Just remember, time travel should be fun. Enjoy and don’t take yourself too seriously. 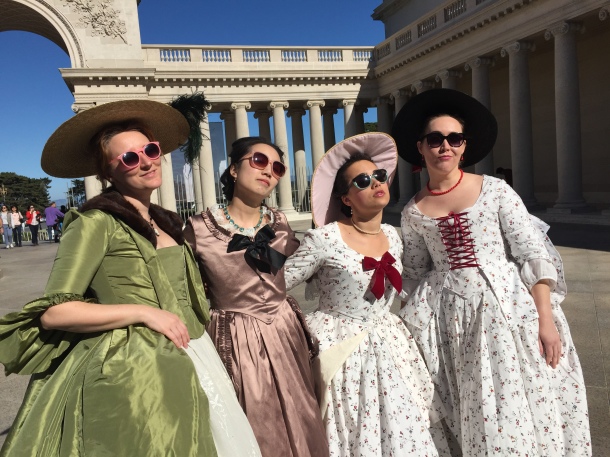 About to drop the hottest album of the 18th century.

Blog @ freshfrippery.com. Instagram @freshfrippery. I believe costuming is about helping others so I post tutorials when I can. I am happy to provide all patterns and tutorials for for free on my blog. It is absolutely optional, but if you would like to donate towards my domain registration and the data costs of hosting the many photos on my site, consider buying me a “coffee”: https://ko-fi.com/freshfrippery. Thank you!
View all posts by freshfrippery »
← 2018 Costuming Year in Review
1830s Cotton Day Dress →